During the E3 press conference, Microsoft unveiled the release date (November 7th) for their new Xbox One X, which they described as “worlds most powerful console”. The main message of the company was not just to announce the release, but to emphasize on the advantages of Xbox One X over it’s biggest rival – Sony’s Play Station 4. It sure is a powerful console and I am sure that it will blow your mind, so let’s get into it.

“With 40% more power than any other console, experience immersive true 4K gaming. Games play better on Xbox One X.” – Microsoft

On the outside Xbox One X is near identical to the Xbox One S, that was released last year. It has a rectangular form, not that large in terms of size and it has a matte grey color. The style of the Xbox is not that important when you have in mind what kind of beast is hiding inside. On the back, it’s again similar to last’s year Xbox. You’ve got a power connector, HDMI in, HDMI out, two USB ports, an Optical Audio port and an Ethernet port.

The most noticeable difference is the color change and the positioning of the disc tray from the top-right front side to the middle-left.What appeals to me most is that Microsoft decided that the console will support mouse and keyboard, which in my opinion in terms of gaming is the best control scheme of all. 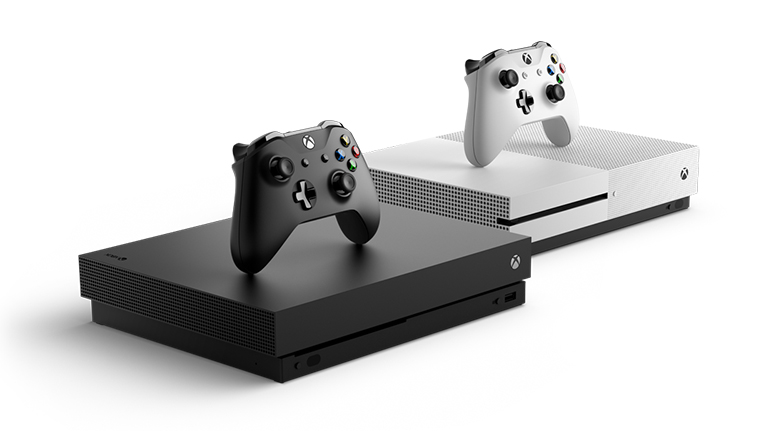 The software will be the same as last’s year, but with some additional features. One of them is the allowance of easy transfer of account settings, games, and apps from existing Xbox One consoles to Xbox One X. Settings can be copied to an external hard drive, while games and apps can be copied between consoles over a local home network.

If you take a look at the original Xbox One you will see that the new “Project Scorpio” has numbers, that are out of the roof. For instance, the 2013 Xbox one had only 12 Radeon Graphics cores (which is not bad at all) clocked at 853MHz, while Xbox One X has 40 Radeon cores clocked at 1.172MHz. That means that it basically has 6 teraflops of power, which compared to it’s biggest rival Play Station 4 is with 1.8 teraflops more.The Xbox One X also has booster it’s RAM from 8GB of DDR3 up to 12GB of GDDR5, for a memory bandwidth of 32GB comparable to Nvidia GeForce GTX 1080. That beast could run games at 4K resolution and 60 frames per second, which means that the graphic details and the gaming performance will be outstanding!

Here are the full specs for the console:

Will it support Virtual Reality?

During it’s E3 press conference Microsoft didn’t mention anything about this topic, despite the amount of fans who said that tey would like to witness it. It is not that easy to add VR as a feature to Xbox One X because Microsoft does not have a VR headset of its own, which means that they will have to land on third parties. As their partner they may turn to Oculus, who help them with optimising hardware to work better on Windows, but neither of them has suggested anything for now.

The Xbox One X is a console that will come up to the expectations and needs of all gamers. It will be priced at $499, and pre-orders have started from September, but they will not include the exclusive Project Scorpio packaging.