Nowadays there are thousands of smartphones to choose from and every model has its own colorways and skins to choose from as well. As much choices you have got, as much harder the final one will be. One thing is for sure – you will never go wrong with the Chinese flagship smartphone, the VIVO Xplay 6. It is a device one of a kind, and I got to say that China is getting better and is becoming a bigger rival every year!

Lately, there was a colorway of the smartphone that I have never actually seen before in the history of technology. Because it is related to sports, I can fairly say that there was nothing like this in the history of sports neither! If you are a basketball fan, I honestly dare you to name me one superstar that has ever had its own smartphone, laptop, TV or anything like this. How cool would it be?

Well, the Golden State Warriors and their franchise player, Steph Curry, got pretty famous in the last couple of years, due to the fact that they won 2 championships and set up some crazy records that could not be broken for years! All those facts lead to the creation of the first NBA theme phone, made by VIVO and in the name of one of the greatest to ever play the game – Wardell Stephen Curry.

What’s is the VIVO Xplay 6 smartphone?

Right now, if you are a fan of Stephen Curry or the Golden State Warriors, you might be thinking whether there is anything else except the looks that would make you get the device and start using it. I get your point and I promise you that this phone is ridiculously good! For people nowadays it is common to not trust things that are not familiar to them, because this exact Vivo Xplay 6 “Steph Curry PE Edition” could be hard to get if you are a USA citizen.

The phone works pretty well and it is no surprise that it is the current flagship phone of the Vivo company. It comes with a Snapdragon 820 processor, 6GB of RAM storage and 128GB of internal. The 5″5′ Super AMOLED display is purely amazing at presenting the pictures made with the 2160p 12MP rear camera. Everything about the phone is awesome and I assure you that it has everything needed, as well as all the features that you’d search for!

Right now, the phone could be found in the generic colors, on prices varying from $550 to $650 and I really wish you luck with finding it in the Steph Curry colorway if you are a dedicated fan… You actually can make some research and you will possibly be able to do it, but you gotta be fast because it won’t be selling for a long time, for real…

Design of the Steph Curry smartphone

There is no chance that you don’t fall in love with the design if you are an NBA fan, and especially a fan of the Golden State Warriors championship team. It is obvious (and expected) that the phone is coming at the GSW jersey colorway and jeez… it looks nice!

The back of the phone is fully painted in matte royal blue color, while the antenna lines are painted in contrasting yellow and this may make someone take the device without knowing who Steph curry is at all. What surprised me most was actually the whole attention to detail – from the very packaging to the device as a whole… You receive the phone in a box that looks like it contains the Steph Curry UnderArmour shoes, and not his phone.

On the inside of the box, you first get to see a little stand for your smartphone, that actually could work as a non-slipping holder, that you can firmly secure your phone in your hands when operating. It has the Golden State logo engraved on it, which is what leads me to the second thing you see right next to it – a rubber brace in the, again, the Golden State theme. Both things are little, but a true fan will truly value them and respect the little attention to detail! 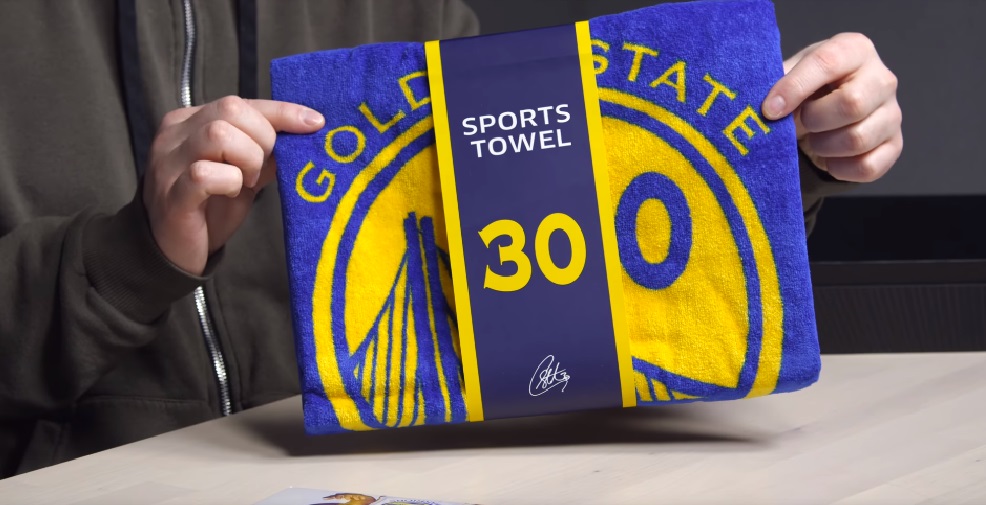 What is more, you also get a Sports Towel in the colors and logo of GSW and a picture with an autograph (not real) from Steph. All of this is awesome and truly fills in and sticks with the whole concept and picture of creating this amazing product. Recently, there is an incredible interest towards NBA in China and such personalities are really getting popular among the youth there, which shows the true purpose of sports – to connect people.

Back to the design

So, back to the design of the phone, I will start from the back, as there is what happens mostly. I have already mentioned that the phone is in matte royal blue on the whole back and it has those yellow lines, that are actually the antenna ones. Right under the two camera lens, you will find the VIVO branding logo painted in metallic black, as well as an autograph from Steph Curry and the #30, which is a representation of his jersey. 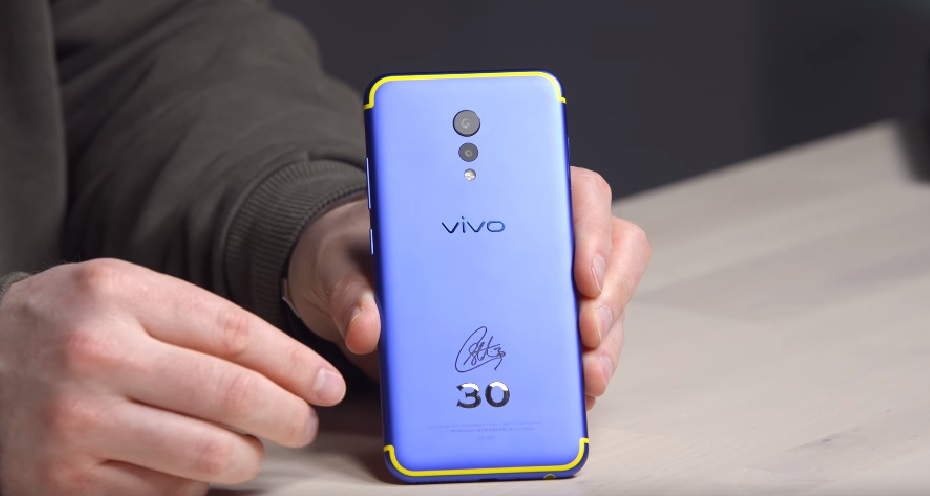 However, if you take a closer look you can see that even the 3.5mm jack is in the yellow color, contrasting the royal blue, as well as the charging port. All those things work together perfectly and VIVO did their job amazingly good by bringing the first sports inspired smartphone to the world! 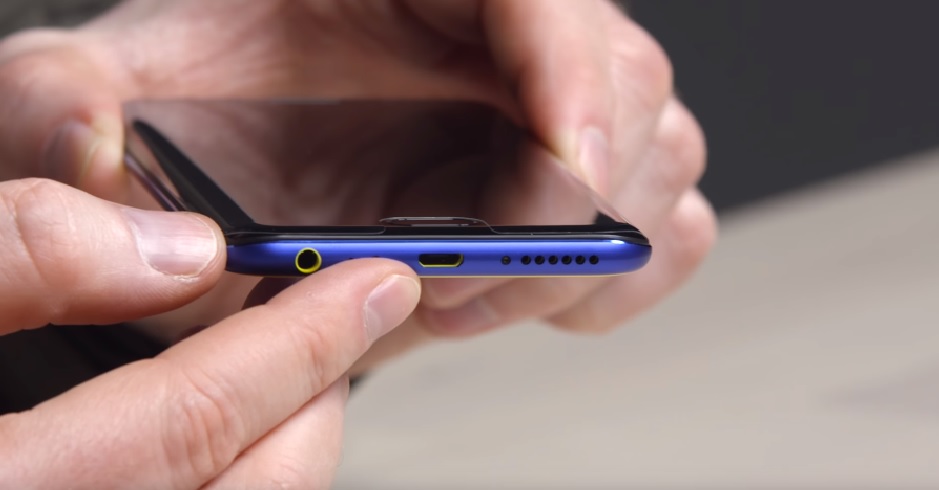 On the front, you can see that the phone operates, expectedly, on a theme inspired by GSW and Steph. All the icons for camera, libraries, internet and etc. are transformed under this influence, but you can opt out for a change of course at any point in time. in addition to all the things you receive, you also get a protective case for the beautiful back in a transparent color, so that everyone can see the original phone outlook, as well as a Premium protective case that again has the signature of the MVP and scoring champion, as well as the leader of most threes made in a season + in an actual game. It is actually the best NBA stream mobile phone ever! 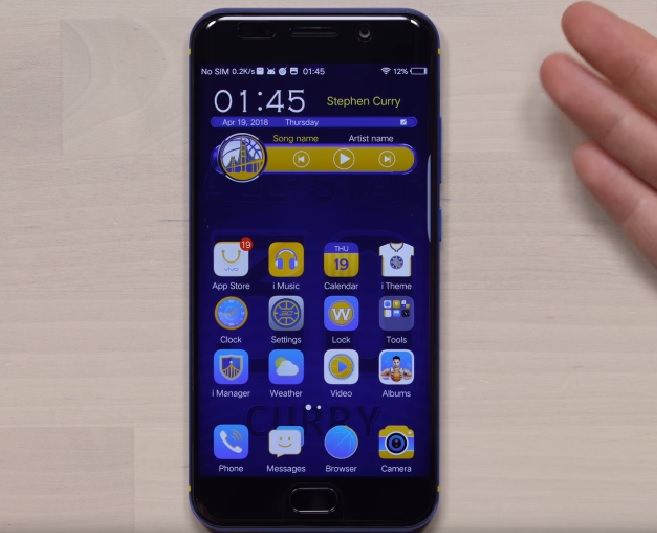