It is nearly impossible nowadays to create a sophisticated operating system like the iOS without it having any flaws or trouble with the whole work. It is not only with iOS, but it happens constantly with Android, Microsoft, and systems of all kind, no matter what kind of precautions the team of engineers take.

Due to the fact that there are numerous problems that could occur, the developers try to work on everything but it is just too much. This is why it is good to have a constant flow of updates so that your whole device runs perfectly and without any disruptive problems.

Just hours ago, Apple released the update to the 11.3 iOS, which is the 11.3.1. It is expected soon to see the 11.4, but the date of release is still unknown. However, in the new 11.3.1, there are some major problems that have been fixed but if your phone works flawlessly, then you would never recognize what’s new and what’s not.

What did Apple fix in this update?

In the last few months, there is a constant flow of complaints that users are having some big problems with the screen of the new iPhone. We all know how expensive the displays for the device is, so people sometimes decide to go with a third-party display, coming from a company that is not originally producing displays for Apple.

When you change your display with a “fake” one, you take the risk to never see your device running again. This is what bothers all those people and they do have a reason to complain about it. Actually, with most kind of technology, as soon as you put something in the device that is not made by the manufacturer, it just does not work as it did before, and you have to be blind to not see why…

I admire the fact that Apple took actions and fixed this thing, but there are two other options that could’ve been considered. First of all, people should never intend to do such stupid stuff on their own head, before consulting with a professional or the support from Apple services.

Second, Apple could have lowered the price of their original displays, because people already spent a fortune on their device, so why should they spend another fortune for a display that has been manufactured by them? If not lowering the prices, for a thousand dollar smartphone, they could at least give a screen protector with the packaging, so that they prevent such money-worthy updates…

Aside from the display problems, Apple said that they fixed some flaws with the security of the device as a whole. I will attach the original statements on what has been changed in the software with the 11.3.1 update. You can also click here so that you can see the page, which shows all those statements on the original Apple website. 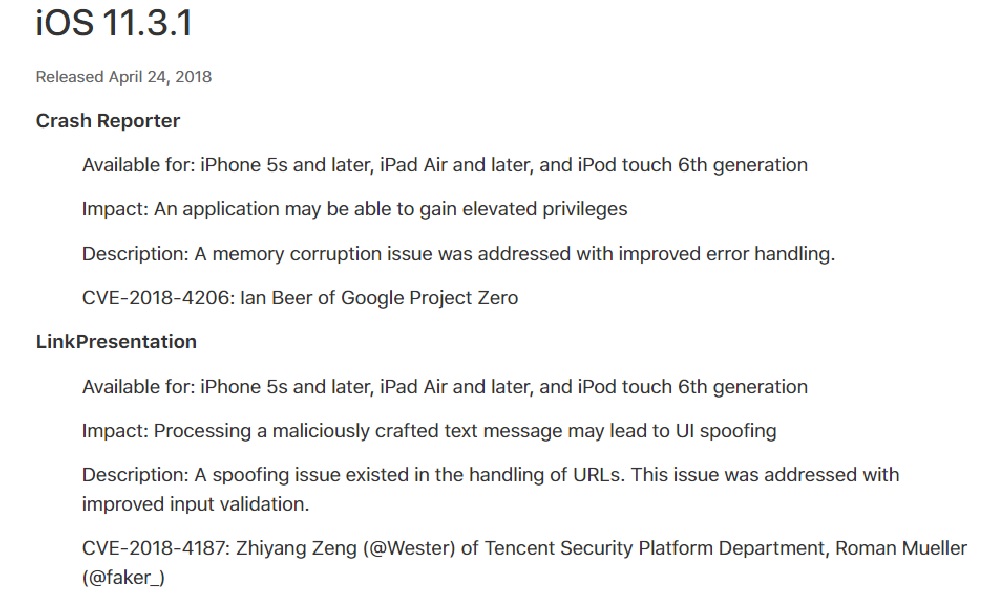 To sum it up, I like the fact that Apple addressed the issue with those displays, but I really think that there could’ve been another way to solve the problem. The update also caused the start of some conspiracies, that Apple actually blocked the work of those displays intentionally, so they make you spend money on the original parts, which if turns out to be true, then I would start hating Apple even more than I do now.