Ever since Nintendo stepped on the market, which was a long time ago, they are always pushing their idea of making the product in XL or in Mini model. They either make it so big that you should put it in a separate room or small and stuffed with different features that do not match the size.

Kevin Kenson decided to go all out and build a Nintendo Switch XL on his own, as well as a Switch Mini version. Both are great but the question “Which one is better” I leave truly to you! I love both of them and I will tell you below which one is my favorite.

The approach that Kevin had toward this whole project is very interesting and once again shows how creative he is. If you decide to do it the same as he did, you may have to spend some of your savings, but at the end, it will be worth it. However, you always have the chance to build it up to your preferences and there are tons of ways to do it perfectly!

When I say that he went out, I really mean that he went out all on the project. He made the ultimate Nintendo Switch console from things that we use daily and are at most of our homes. For the screen, he chose to use a big OLED TV that is lightweight enough to hold it in your hands and not that big in terms of width, as you’ll be holding it with both of your arms. 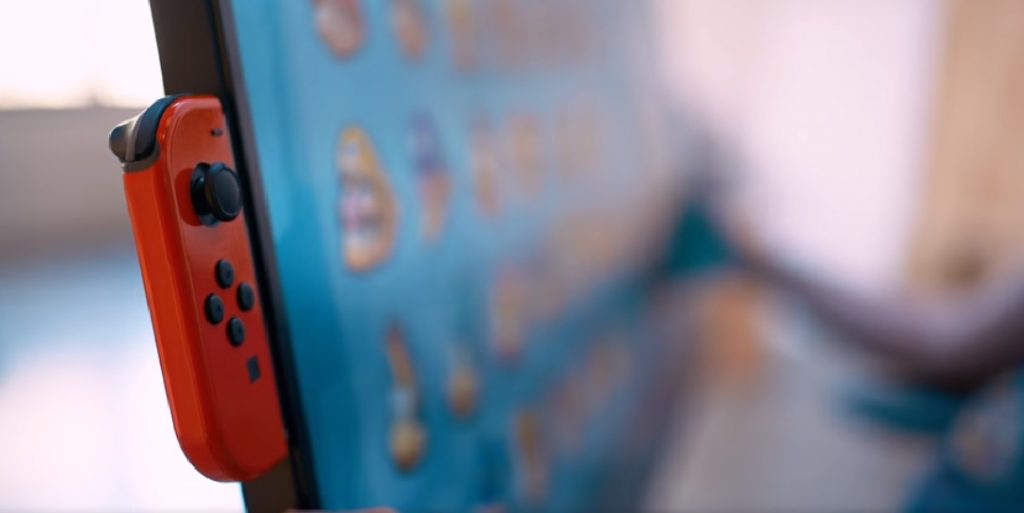 I don’t think that it is the most comfortable console that you’ll ever use, because your hands will get stiff or hurt after 1-2 hours of playing. He decided to put two joy-cons on each end of the TV (left/right), which you use to control the whole console and use the open up dock that he has.

It is a good thing that he has a stand on the TV, which he put on his lap in order to save up from the whole weight of the monitor. I suppose that it is super fun to play on a device this big, but I don’t think that it is for all of us. Standing so close to the TV will cause surely some eye problems in future and some people might also get motion-sickness from the graphics being displayed so close in 3D in front of them.

Now you might say “Why making Nintendo Switch Mini, as it is already in a MINI version”… right? Well, it is already in a mini version, but do you really think that the display is the best one out there on the market? I do not think that it is even close to the top-end displays in stores and Nintendo really could’ve done better.

This is why Kevin decided to work the problem out himself by changing the display with a higher resolution one. He hooked the device up to a small HD screen, which is exactly 5″ big, being just slightly bigger than the upper screen of the 3DS XL. It is a smaller screen than the regular Nintendo Switch one, but it is 1080p., instead of 720p., which makes it look way better!

Which one should we see in stores?

I do not know whether you will support my opinion or not, but I can say that I do not like the idea of making a Nintendo Switch XL – there’s just no need to. There are already tons of consoles that get easily hooked up to a big-screen TV and you are ready to play for hours, but there are not that many Mini consoles that enable you to easily carry them around wherever you go.

This is why I think that the Mini version of the Nintendo Switch is what we should see in stores, regardless of the fact that the regular Switch is already in a perfect size. Having a wide variety of mini consoles that are perfect for travel is what I’d love to see instead of those big-sized and meaningless console types. If you want a bigger one, just get a PS4 and a 100″ TV and you’re ready to go!